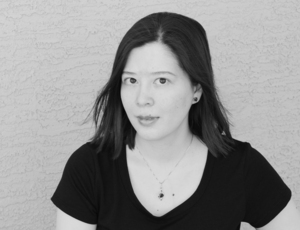 Karen Rigby is the author of Chinoiserie (Ahsahta Press, 2012), and a co-editor of Cerise Press. She lives with her husband and son in Arizona. Read more at www.karenrigby.com.

I started writing stories in the first grade. It wasn't until middle school that I turned to poetry in earnest. Since then, my relationship to writing has shifted between doubt and confidence, exuberance and dismay. Sometimes I'm closer to the work, other times not. It is an ongoing series of questions – with other literature, oneself, the larger world.

What's a project (yours or another's) that has been exciting you lately?

Home. Postpartum, many "to-dos" fell by the wayside. They weren't important then. But now, nearly half a year later, I'm looking forward to knocking some of those items off the list. It seems as good a project as any, post-book.

At the time of this writing, my first son is almost six months old. I was 32 when he was born, and I am 33 now. The motherhood journey has just begun.

What are some crucial elements of your process? How has that changed since having children?

Fallow fields, going underground, reading, solitude – all of these are needed for the writing. Since having my son, solitude has become rare. Almost everything I do now happens in his presence. The non-writing tasks (correspondence, applications, tracking expenses, editing, querying) are easiest to manage, because I can start, stop, and return to them without feeling that my concentration has been significantly broken. I’m still trying to grow used to interruption as something routine.  As for the writing, extended blocks of time are nonexistent. When I do come to the page, there is less revising, because more of that work – weighing choices, discarding one word for another – has had to happen internally.

My husband and I are in different fields, but I’m very lucky that he understands the drive. He takes care of our son when I need a break. I wouldn’t go as far as saying that poetry is the center of our home and that everything else constellates around it (it doesn’t), but I would say that “what mom does” is felt.

I want my son to have a firsthand view of what it means to be interested. I’m not too concerned about him learning life lessons from my being a writer – dedication, for instance, or handling setbacks with equanimity, though of course, he will learn all this and more. I’d like him to discover the joy in creating, regardless of his chosen field. Before his arrival, I hadn’t appreciated the extent to which creativity does matter  to me. It is now brought into sharper relief.

Not yet. If I’ve lived through an event, or gone through any change, it takes years before the material appears on the page. I don’t write from a place of immediacy.

How does travel figure into your art?  Do/did your children come along?  How has that worked out?

Travel happens through the imagination. If I write about real locales – such as Pittsburgh or Phoenix – I’ve often (though not always) lived there.  On the more down-to-earth side, there is also the travel that happens for promoting one’s work. This year we all went to the AWP conference in Chicago. Before leaving, I worried about logistics, how my son would hold up on his first flight, and so on - the reality, though, was that he was mostly fine, with some exceptions, while I had a divided mind.

The desire to be there, wherever my son happened to be (which could sometimes run counter to the need to be here, wherever I actually was) proved stronger than I anticipated. I also found that any challenges encountered at home, such as exhaustion, don't (of course) vanish by changing the scenery. Traveling with an infant is an adventure, and pulls one out of a deeply interior space. One also realizes how the world seems to divide among those who enjoy a child's presence and those who regard it as troublesome. We received a few looks along the way. Still,  traveling widely with my son once he is older holds great appeal.

What about promoting the arts with your own children--any fun projects to share?

My son is too young to attend, but I’m eagerly awaiting the moment we can take him to the Arizona State Theater to watch plays. For now, I read to him, and have tried playing him recordings of poets on fishousepoems.org. I’d like to try a variety of crafts later on.

I love this question – “how do,” not just “do” – for its honesty. It wouldn’t be true for me to say that I can include my child in every activity. Escape happens in intervals. Most days I have to let the idea of accomplishment go. I can’t begin the day with the idea that I’m going to get “a lot” finished, because chances are the day won’t unfold in such a way anyway. There’s a lovely line in a poem, “Little by Little Psalm” (Paul Otremba), which begins “Little by little the work / gets done.” This is how it often is around here.

Changed expectations – not enhanced or diminished, just changed – of yourself, your time, your work, the household, your immediate and extended family – will happen.  The first year may be the hardest.  It may also be your own annus mirabilis. It may shift between these poles all of the time. The great shock is also the great mystery: you will not be the same.
Posted by Molly at 1:30 AM