you know – it’s rather hard to describe this – I liken it to asking what is your relationship to your heart, or brain, or gut. It’s a part of me. Sometimes it’s just a piece of me that operates on it’s own level – I’m unaware of it. Sometimes it screams for attention – or it aches – or I’m just simply aware of -- similar to the feeling when you are struggling to remember something you really should remember, or when you have a lowgrade headache.

sometimes it feels like it’s a gift. Sometimes a burden. I try to be patient with it, and  hope it will do the same for me [this is where it reminds me of being a mother].

I have a propensity for being alone. Art nourishes and demands this.

it has slowly become just a part of the fabric that makes up my life. It warps and weaves and sneaks in. it wraps me up with a feeling of knowing – it allows me to express myself – and to make contact with the outside world.


What's a project (yours or another's) that has been exciting you lately?
I’m working on a new series of work that is rooted in the idea of migration. It has components which are both highly personal [my and my family’s migration] and also reaching for a worldlier view [the migration of radiation from Fukushima]. This is the first time I’ve been able to combine these interests - personal life story telling and work that has a more political and greater awareness – under one banner. This is both thrilling and scary. But I’m a firm believer in the notion that the biggest growth and chance for learning happens when you are on a precipice – willing to take a leap of faith. And when you make big huge mistakes. 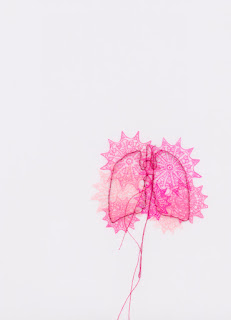 I wasn’t ever really sure that motherhood was in the cards for me. My husband and I tossed the idea around, but never solidly. Finally one day he just turned to me and said we should do it – and I was finally at a point in my life where I knew that it was never going to be “easy” to have a child, and that it wasn’t going to get any easier – so I said why not? And then I got pregnant immediately.

I wasn’t one of those people that reveled in being pregnant. Mostly I felt like a science experiment the whole time – and by month 6/7 the baby had lodged herself under my ribs and so I was pretty uncomfortable. But I was also totally intrigued – I mean in a way this is what we were born to do right? So it was fascinating. And baby hiccups are the funniest thing ever.

My daughter decided that she didn’t want to be in utero anymore and decided to join us 6 weeks early. This was a bit frightening. She ended up staying 10 days in the infant NICU [she was the healthiest baby there by far, but it was still intense].  I look back at it as a blur of craziness – pumping, worry, joy, helplessness, amazement at the tiniest of hands [she was 5 pounds].

and now she’s 3. When people say time moves faster than you can imagine it’s true. Actually the first year or so is this odd amalgamate of time that moves both incredibly fast and exceedingly slow at times. But that indescribable burst of love that you feel for your child and your child only is one of the most incredible things I’ve experienced.

in thinking of having a child, intellectually I was worried that I would loose too much of myself. I had seen women who gave up their lives for their children – and while I felt that it was every woman’s right to make such a decision – I didn’t want that for myself. I didn’t want to be overcome and just give up other aspects of my life and my work. And with the help of a supportive husband and family I haven’t had to. 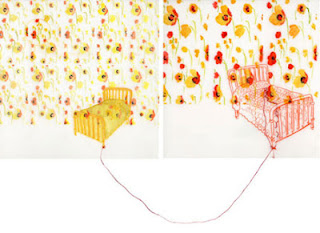 research research research is key for me. I need to feel really invested in my subject matter. While I love process I need to have a conceptual grounding [usually] for what I’m doing – even if it’s just the simple idea of exploring a material to it’s fullest. I find that I make better work when my mind is engaged [and thus in a way distracted] in the pursuit.

what has changed? I don’t waste time like I used to. Don’t have the luxury. I’m much
more focused in the studio than I ever was before having my daughter. 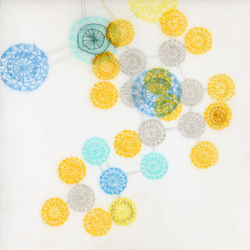 What are some of the ways your family and your art interact?
so far – it’s rather minimal – but I can see how that might change. I’ll tell you a story::

the other day I picked her up and I had red paint on my hands. She asked why. I said because I had been painting red dots. She asked if she could see. So I said of course. When we get home you can come look in the studio and see.

when we got home she ran to her dad and said “we’re going out to the studio to see mama’s red dots !”. And out we went.

She started looking at some other drawings and recognizing objects in them. Including her favorite pink bunny that she calls ba-ba. She immediately turned to me and said “I have to go get ba-ba and show her”. She ran inside and brought her bunny out to see. And that melted my heart.

I have no idea what our future interaction holds – but if it’s anything like what has already happened – I’ll be blessed. 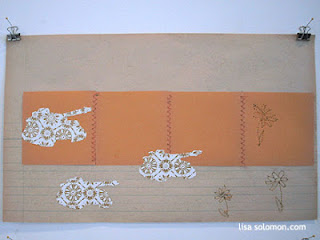 Do you find your attitude towards your art might be different because of your parenting / has it changed since you became a parent?
how could it not? I’m not sure exactly how to quantify this. I value my time with my art more than I ever did before. It feels like such a gift – and perhaps even more of a necessity. I need to find the time to make it – it helps me feel like a complete person – and therefore a better parent. The last thing I would want is to feel resentful – like I had to choose – art or parenting....

The moments I have alone in my studio are incredibly precious – and I’m supremely grateful to my daughter as she also gives me moments completely AWAY from my work. It’s good to be separate from both. It feels like a balancing game, but it feels right.

Are your children ever subjects in your art?
yes. She is. But so are all my family members so it only makes sense. I tend to include my family subversively – so it’s not obvious.

I am super duper cautious about putting her “out there”. In this day and age I feel like it’s important for her to make the decision about her internet/public exposure. The internet is a living and breathing thing and it doesn’t die... Pictures and thoughts can remain out there for anyone to dig up for eons after you’ve posted them. So I try and guard her. If and when she’s ready she can expose herself to whatever degree she wants to, but I don’t want to be the one making those decisions for her now.
How does travel figure into your art?  Do/did your children come along?  How has that worked out?
I travel to my shows when I can – not so much for group shows, but for solo or two person shows I make every effort.  I was lucky enough to have a show in Italy last Spring and my daughter got to come.  I have to say it was only possible because my parents were generous to offer to come with.  Sadly my husband wasn’t able take that much time off of work. In this way, I had back up and people to care for her while I worked. We rented an apartment and were able to keep life pretty close to “routine” which is of immense importance to my daughter. Especially at that age – she was 13/14 months.

I have an upcoming solo show [in April] at Walter Maciel Gallery in Los Angeles and we’re doing the same thing. This time the installation and the time away won’t be as intense. And there won’t be a time change, or culture shock... But I’m thrilled that I get to continue on with my artistic life and that she gets to be a part of it. And again my parents are really instrumental in this endeavor. I can’t thank them enough. 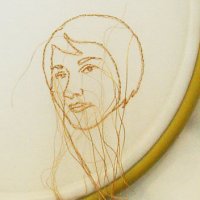 What about promoting the arts with your own children--any fun projects to share?

you know – it’s funny but I don’t do anything CRAZY or involved with her artwise. She’s not really old enough yet and I have dreams of us sitting in my studio – she in her corner me in mine as we just work away. But I know if I push for that it most likely won’t happen. So I just try to have supplies around. And allow her to just do her thing. Whatever that may be – just using water to paint on colored paper, or busting out the watercolors [she has to have 2 cups – one for colors and one for black]. Or stamping... Or glitter glue – god she LOVES that stuff. I try to wait for her to ask to do something so that it’s really something she wants to do.

what cracks me up is how she just picks things up. Like she totally knows how to clean her brushes and dry them in the paper towel just from watching me once.

In thinking about it... I also just take her to art events. So she knows all about “art shows” and other artist studios – she’s not allowed to touch anyone’s art except for mama’s. In Milan we watched a William Kentridge piece together.... Maybe it will just be so entrenched in her life that there will be no promotion necessary. Seamless integration. That seems nice.

I escape into books.
or into a bathtub.
I escape into my studio.
sometimes I escape by doing absolutely mundane things – like going to the drugstore – BY MYSELF. 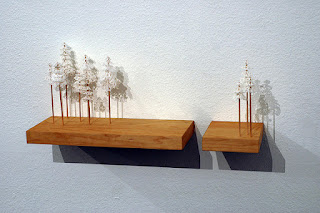 - Don’t feel like you have to do it all. The dishes can wait. Your art can’t.
- Trust yourself. You are the best possible mother for your child. That is just a fact. And it’s so easy to fall into doubt or guilt or just plain exhaustion.
- be kind to yourself when you make mistakes. [easier said than done]
- it will all work out – maybe not in the way you expected – so be open to crazy solutions – but it will work out.
- learn to ask for help [this was very very hard for me].

I’ll just end by saying that for me one of the hardest things was realizing that I couldn’t intellectualize or solve every problem with research or a certain approach. That what I was SO worried about before having a child – maintaining a sense of self AND my creative life – has indeed been difficult, but not as impossible as I thought it might have been. That in the end parenting is sometimes just hanging on for dear life by a fingernail.... And then that moment of panic subsides and some sublime and usually hysterical thing happens next.
Posted by Molly at 11:05 AM