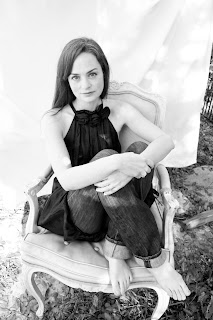 Julianna Baggott is a novelist, essayist and poet who also writes under the pen names Bridget Asher and N.E. Bode. She is an associate professor at Florida State University's Creative Writing Program.


Tell us about your relationship to your art.


It's an organism -- not unlike a marriage -- living and breathing, ever-changing, reliant on osmosis from the world around it.


What's a project that has been exciting you lately?


I'm taken with the idea that each choice splinters your future and we are confined (doomed?) to only one life.


Tell us a little of your motherhood journey.


I was married at 23, pregnant at 24 (after graduating from grad school), had a baby at 25, was pregnant at 26, had a baby 27, was pregnant at 28, miscarried, was pregnant at 29, had a baby at 30, seven years later, I had one more baby. Dave and I always wanted a relatively large family. It was all in the plan. I also published my first story at 23, became a poet because of motherhood at 27, started publishing poems in my late twenties, and had my first book contracts -- for a novel and for a collection of poems -- at 29. Because I was a young mother and young writer at the same time, the two processes became deeply entwined. My creative process either grew like a tree with truck and roots that winding around a house, so much so that the walls and foundation are what weave the house together or the process was built like a house into and up against and part of a tree itself. The house is the tree. The tree is the house. Whichever.


My creative process has been forced, as a result of children, to become incredibly efficient. Mainly, I learned to write while not writing. Meaning -- I learned to tell the story to myself in my head, visualizing it, far from the computer -- while walking kids somewhere, driving, cooking, nursing ... And so my work has become more and more visual by working that visualization muscle and I've learned to head-edit. Editing on the page -- writing the scene out ten different ways -- burns a lot of time. To visualize, edit, revisualize takes minutes not months... I return to the computer knowing what I'm going to write. Motherhood, unlike some other jobs, is conducive to writing-while-not-writing in the early years of child-rearing especially because the demands are more physical. Nursing, for example, takes up hours and hours. Eventually, you learn to vacuum while nursing, but even doing these two things at once, your mind is liberated to wander -- a trained kind of process of mind-wandering and visualizing and head-editing (all of this writing-while-not-writing) is excellent training. It's something I've begun to teach a little in workshops -- without the babies and the vacuums, of course. It's a discipline that allows the brain to untether from strict rational methodical plotting and words (which can set too fast like cement for young writers) -- and move into allowing the brain to roam, then reeling it back in a little when it's roamed too far, then resetting it to roam again. It's a technique that's part of a talk I give called "Efficient Creativity." It's a practice really.


(I realize that some mothers will hate what I've just written and rail against it; I've been here before. I don't state the above as something that's right or true -- except for me. Teaching, for example, takes up my creative head space and it also feeds me creatively in ways that can render writing less urgent. I've learned to combat this as well as I can. One might also be frustrated because I'm talking about being a stay at home mom in the example above in some ways. I was a stay at home mom the first six years of our young kids' lives -- had the first two kids under the poverty level -- and made many sacrifices along the way. But, look, what I hope for the next generation of mothers is that we praise each other's choices. We support each other. And we stop pushing and shoving against each other, trying to enforce that our way is the right way... In other words, pick and choose from the paragraph above, as you see fit.)


My art interacts with my family a lot -- it draws on them constantly. However, aside from my husband who is also my creative and business partner, my family doesn't interact much with my art -- though my oldest was crucial to the writing of PURE, the first in a dystopian trilogy. One was assigned The Anybodies in school and had to read it. He looked at me oddly for a few days, as if surprised to find out some odd rumor that had been floating around the house was actually true -- his mother was a writer. He also read The Prince of Fenway Park after hearing friends talk about it and ask him questions. Once I was up for a writing prompt challenge -- live online -- against Robert Pinsky, former Poet Laureate of the United States. I was talking about what I might have to write about. My daughter said, "Write a poem about me." I told her I'd written a whole book of poems about her. She was surprised. I read her one or two aloud, and she didn't want to hear anymore. There's a natural division that seems to have occurred. My kids don't want to be raised by a writer. They want to be raised by their mother. I respect that.


The practical response: After Tennessee Williams had a real health scare, he realized that he had to write a play that would make so much money that it would support his sister -- who'd been lobotomized -- for the rest of her life. I believe the result was "Streetcar Named Desire." He made art that he thought would make money. So on the surface one could say that his goal was to make money, but really his goal was to protect his sister. His motivation wasn't greed. It was love. So here I am, sole breadwinner for a family of six. I am not apologetic about the fact that I want the books I publish to earn money. I write art that is often entertaining. I write entertainment that is often artful. I also write some pieces knowing they'll never make a dime. But when someone insinuates that I'm a sell-out -- and when someone's successful this can sometimes pop out, in a writer-on-writer crime-scene cocktail party kind of way -- I don't give a shit. It's all love in here. Go ahead and try to judge my heart -- you won't find a sports car in it.


The emotional response: Having children mined me in a very specific way. Life mines all of us, though, so I'm not claiming some superior mining because of children -- I'm just stating that they were my mining.


My rule seems to be that I can write about my parents -- they made me so it's their own doing. (They've also given me free reign.) I can write about my husband, too. He chose to be with me and he knew going in that I was a writer. My siblings, my children... they didn't choose me. I was forced upon them. And I am keenly aware that my life as a writer has given me a platform for expression that others don't have. I tread carefully. I think about these things deeply. There are things I want to write about -- urgent things -- that I simply don't allow myself access to.


I also believe that there are other artists whose gift is to tell a truth that no one else is willing to utter. These artists sometimes hit upon a truth that spurs a great discussion, a necessary one.


How does travel figure into your art?  Do/did your children come along?  How has that worked out?


My kids have come along to a lot of events, but fewer and fewer. The research trips have been incredibly rich for them. But we no longer bring them on many of the others. I travel a lot. We try to keep their routines in place.


What about promoting the arts with your own children--any fun projects to share?


Writing is the escape from motherhood. Motherhood is the escape from writing. It's a box with only two trap doors. A very, very narrow but very, very deep way to live. I don't suggest it lightly. To be as prolific as I am -- my twentieth book comes out next year -- there isn't a lot of foofaraw in my life.


What advice do you have for expectant mothers in your field?


Put your elbows out, protect your time. This means that if you have a partner, that partner must step up and -- this is the tricky part -- you must allow them to step up and find their own way to parent. This is an act of deep trust. It means that you can't micromanage from the computer chair. It means that the sippy cup tops and bottoms might not match. We talk about sexism in the publishing industry and there's much work to be done, but most of that work begins with two people having a conversation at a kitchen table late at night after the baby has finally fallen asleep, two people who have to decide -- often with limited resources -- which career deserves to be pushed, deserves time and support. Writers often fail at this conversation. Women writers often cave at this moment -- do their budding careers truly deserve time?  Assert yourself now. Set the ground rules early. Elbows fucking out. You deserve the time. Your partner needs to step up. This is where it begins.
Posted by Molly at 6:10 AM