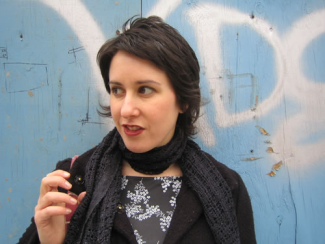 I am able to most clearly think, absorb, mediate and explore my life and the lives around me via my art.   It helps me counter and re-frame the compartmentalization, prescriptions and projections felt on a daily basis.

What's a project (yours or another's) that has been exciting you lately?

As of late I’ve found myself becoming more involved in collaborative projects.  I just finished working on a small book, LITtle by LITtle, with an urban geographer and photographer, Laura Y. Liu.  I wrote the text and Liu took photographs engaging in ideas about the everydayness of an interior domestic space.  The book itself acts as a space and tribute to the minute thought, gesture and observation, where even particles of dust are given weight and valued.  We are using LITtle by LITtle  as a basis for an upcoming NYC performance we are doing with the collaborative, interdisciplinary group Wonder Machine.

Hmm.  Well I guess I could say I was ambivalent in having kids. I was protective of my own time. But then I did, and I had twins (my mom’s a triplet!).  It was sort of hellish and sort of a blur in the beginning.  But I liked it so much that about 4 ½ years later I had one more. Crazy.  Ava, Judah and Iris are really great little people. They make sure I keep it real and are also supportive of who I am and what I want (as much as they have the ability to support me!).

I used to need a lot of space to think through ideas, research, take notes, etc. I would do month-long residencies and spend a lot of time flipping through books and looking out my window. That’s a past life now. Time is such a strange concept after having kids. I never really marked or noticed time quite the way I do now. Everything is demarcated by time—15 minutes to respond to my emails; 22 minutes before food needs to be on the table, etc. I’ve been forced to live more out of my head and to think quicker than my natural pace. I resented this and resisted it in the beginning but then I began to see it as falling into a new poetics: one of speed, interruption and overall disruptiveness. I presented a paper on this called “The Synergy of Poetics and Motherhood” at the  Belladonna: Advancing Feminist Poetics And Activism Conference.

My seven year-old twins read some of my work, which is hilarious. One time I was visiting my daughter Ava’s school. The class was sharing stories they’ve written with parents. I went over to one of Ava’s classmates, Alexa, and read her story and complimented her and she looked straight at me and said “I’ve heard you have written some stories of your own.” It made me happy that Ava was obviously talking about my poetry to her friends.  We generally are a creative family and do a lot of word play, dance, performance, etc., at home.  My kids have gone to several readings with me.  They love the annual Poetry Project New Year’s Marathon Readings. Though they do tend to loudly critique the various poets’ work and I end up having to quickly remove them from the scene. My kids also have read poems at several events that I have been involved in.

I don’t know how it couldn’t be different.  For me parenting has been an exercise in trying to sustain engagement and presence for long periods of time. I’m not great at it but I’m certainly better at it than I was before.  I used to live a lot in my head and now I feel I’m much more aware of what’s in front of me.  My work has become increasingly observational (but not in a passive, descriptive way) in an active, frenetic and layered context. It’s not as tidy or one track.  I’ve been working on serial projects for several years now and they all seem to be about expanse, nuance and trying to explore several ideas simultaneously. 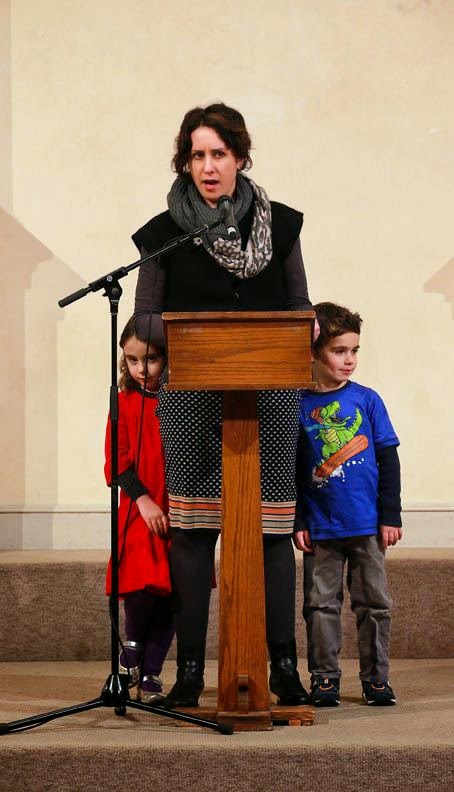 I try to avoid using people as subjects or at least approaching work in that way.  I feel it puts me at a distance or in authority position that I’m uncomfortable with.  But I do think my kids, like everything I experience, absorbs into my work in one way or another. At some point I’d like to embark on some collaborative writing project with my kids as that would be fun and I’d probably learn from them. I also do have a manuscript called Bear that is about a quasi-human Mama Bear and her two cubs loosely based on not so much my kids but my experience of motherhood.

Aside from the obvious need of more time, what has been one of the most difficult obstacles you’ve had in regards to parenting and your art?

Accepting that a day is more unpredictable than I could ever imagine. A kid(s) gets sick and you drop everything.  What I think I can preserve as “mine” keeps getting negotiated. Plus I just get so drained that it’s hard to go to readings at night and get my body in motion.

In turn, what are some of the saving graces?

My Po-Mom writing group. They’re tough and insightful and can whip through editing a bunch of each other’s poems with kids crawling all over the place.

Beside the good ol’ combo of TV and wine, I hate to say it but my job (university teaching) is an escape. I like to feel that I have several flexible identities and professor is one of them. My job is so demanding that I don’t have a ton of time to think about what’s going on at home.

Be very kind to yourself and forgiving. You can’t imagine how much effort it takes to manage a small life. A day can get eaten up with the most mundane, menial tasks it’s mind blowing.  Accepting how much work it is to parent and giving value to this helps one feel compassion when moving a turtle’s pace with other interests and ambitions.  And of course, if you have a supportive partner it is all the better.